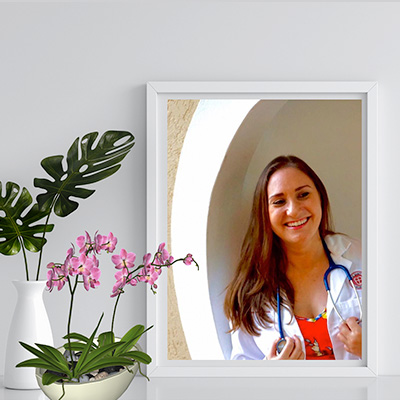 Elizabeth (Liz) Wilson grew up in Newbury Park/Thousand Oaks, CA, which is nestled between Los Angeles, Malibu and Santa Barbara. She went to undergrad at the opposite end of the state at Humboldt State University, where she earned a bachelor’s degree in Zoology with a double major in General Biology in 2008. However, the drive to become a veterinarian did not strike her until 2012 when she started working at a small animal clinic in her hometown. Curiosity in veterinary medicine grew until she realized it was her calling. With time running out on being able to apply for veterinary school, fortune found her and she hopped on a plane to Grenada for a 4-year adventure of a lifetime and graduated from St. George’s University School of Veterinary Medicine in January 2021. By that time she already had started calling Las Vegas home and in March 2021 she joined our family at VRAH as an associate veterinarian. Dr. Wilson recently adopted a kitten, Opal, who has filled the void of having no pets while she was in veterinary school, as well as keeps her on her toes! She has a strong passion in internal medicine, behavior, and dermatology, as well as all things feline!

We have taken Boo here her entire life ( 8 yr female American Pitbull) and will not go anywhere else. They saved her life when she came down with Addison's Disease and we nearly lost her. The staff are fabulous and the office extreemely clean. You can tell they really love what they do! Best of all, she loves going there and can't wait. Good thing as she now goes every month for her shot, that keeps her alive. She is also on a weight management program. Ask and try it. It's amazing!!!